Riddles, puzzles, and ciphers are the bread and butter of most ARG’s. There are a few reasons for this (which I will go into detail about in subsequent posts), but for now let’s just focus on how the rabbit hole employed a simple one to introduce the game’s narrative and get their brains working.

Early on I decided that the core narrative of the game would be relatively simple but hopefully engaging: a priceless document, the “journal of Odysseus”, is stolen by a mysterious thief and he is challenging the students, a la The Riddler, to solve his puzzles in order to get them back. To initiate this narrative, the BBC article is written as authentically as possible but does immediately drop some clues that Something Is Strange: the befuddled archaeologist mentioned in the article is named Dr Henry Jones III, for example.

A few thoughts about narrative – it’s really important! The most engaging experiences we have are emotional ones and games are no exception. A good story immediately frames an activity with meaning, even a simple one. To me, that is the heart of game based learning: you allow students to add their own meaning to their own learning. Don’t be discouraged! You don’t need to have the narrative chops of a professional fiction writer to draw your students into an ARG. A little narrative goes a long way.

For Dolus, the narrative is mainly introduced through the fake BBC article and it is your textbook heist: something stolen and only you can get it back! The article quotes a mysterious note containing a riddle which begins the hunt; the riddle is worded to explicitly reference an element of my school’s culture in order to draw their attention.

“DOLUS resides in fair fields where crusaders roam. Send a digital hello to me there and we can begin our game. Only those whose blood is blue and white can get the journal back.”

Nearly all students immediately realize this strange note somehow has a connection to the school, and to them. To further emphasize the connection, the school colors, blue and white, and mascot, the crusader, are mentioned. This is the moment where the game world and the real world begin to blur. You can also already see the singular nature of many ARGs, especially those made for the classroom. They are not easy to simply “transplant”. They require a lot of customization to the specific school environment, but I assure you they are worth the time and effort!

I have changed the wording of this riddle a few times; it initially involved hunting for a specific website about the origin of Dolus: the Greek god of trickery. But I found it was a bit too early to involve ARG mechanics that required a lot of investigating since it is a brand new type of gameplay to them. This riddle has been pared down and simply requires them to figure out that they need to email Dolus, who is waiting for them at a school email address created specifically for the game. I have found this to be a fairly typical progression for my puzzle design. Ideally, you want to find that “sweet spot” of difficulty: hard enough to make them sweat but not so intimidating that they give up completely. There are a few ways to approach this problem and in a later post I will address them in detail. But I have found, at first, that it’s better to err on the side of being more difficult than vice versa, since you can always give hints to help them progress.

Compared to the types of ARGs found in the corners of the internet, Dolus was designed to deploy comparatively obvious hints and clues, especially in the early game, since this is a genre of game that few, if any, of the students are familiar with. Even then, some students needed a rather significant nudge to read closer and realize there was a riddle to be solved; this is not surprising since ARGs go to significant lengths to pose as not a game! The riddle eventually leads the students to a fake, but functional, school email address that was set up with the help of my school’s IT department (this was both for immersive effect and to keep all game communications within the school network). Once that email is contacted, the student is immediately sent a “welcome video” hosted on an unlisted Youtube video which sets up the antagonist, lays out the basic “plot”, adds some more narrative flavor, and offers up the next puzzle. 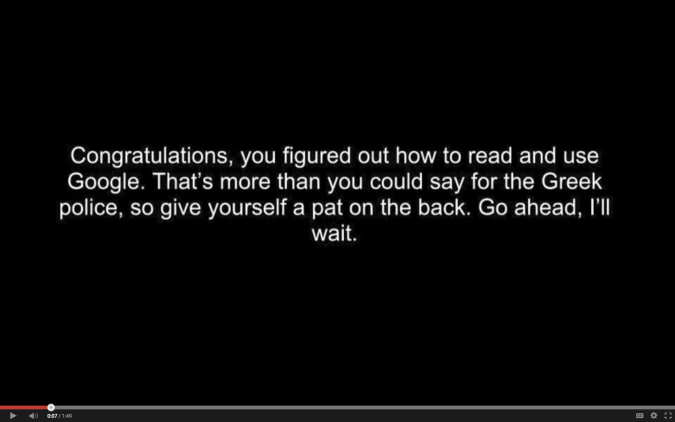 This was relatively easy to make. Armed with my Macbook, a script, Apple’s iMovie, and a quick Youtube tutorial on how to use the free program Audacity to scramble my voice, I laid down an audio track of Dolus introducing himself. In addition to the audio track, I inserted a few relevant images into iMovie (including the puzzle text which was taken from screenshots in Pages; iMovie does not handle large amounts of text well on its own) and uploaded it to a private channel on Youtube, under an account made specifically for this game. In the next version, I plan on spicing it up by replacing some of the flavor images with relevant video clips, but again, start small. You can add more detail and depth as you improve the game each year. It is much better to design something that is simple but fully functioning than something more detailed that might not work the way you intend, or at all.

iMovie is a great program to use since it mostly relies on simple drag and drop mechanics. I dropped relevant pictures and text into the program and then laid the mp3 recording (scrambled in Audacity) on top of those images. It is then a simple process of making the timing of the pictures match the content in the audio recording. The most recent version of iMovie even has an option to directly upload finished videos to different websites, including Vimeo and Youtube, making the process even easier. If you don’t want/need to scramble your voice, iMovie also has a built in feature to add a voiceover. But be sure to make a script and do several takes!

The welcome video ends with the first official puzzle and the hunt begins!

Dolus hands out his first riddle

If you have comments/questions, feel free to drop a comment below, or tweet at me at @johnCfallon

In the next post, Riddle Me This Part II, we will look at how this basic ARG style puzzle works and how the students use it to progress in the game.

This work is licensed under a Creative Commons Attribution-NonCommercial-ShareAlike 4.0 International License.